Emirates Joins Fight to Save Endangered Wildlife
Well done to Emirates Airlines for the super Jumbo message against the illegal wildlife trade after Cecil the Lion was hunted and killed. 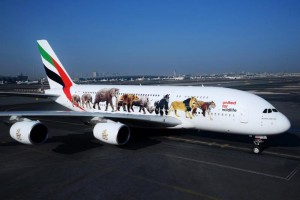 Numerous airlines including Emirates took a stand and banned big-game trophies from flights. The Dubai-based airline now has taken that one step further, showing its support for United for Wildlife, by paintings of endangered animals on two of its jumbo jets. Approximately 40% of the surface area of the A380 aircrafts is covered by the decal.

The decal on the first flight featured six endangered species, while the second flight was with rhinos and elephants. Both designs cover the world’s largest passenger aircraft almost from nose to tail, spreading over the wings and under-belly of the plane.

The airline operated 2 flights in November with the message across its two A380’s. The first one departed for London on 2 November and a second to Mauritius on 5 November, each with a different design featuring endangered wildlife.

Entirely designed and applied by Emirates’ in-house staff, both of these are the largest decals the airline has put on any aircraft, to date and took a team of 28 people to apply on one A380.

In addition to its two A380s literally “flying” the flag for the cause, Emirates will run regular feature stories about wildlife protection in its inflight magazines, and feature wildlife programming and films on its inflight entertainment system.

Sir Tim Clark, President Emirates Airline, said: “Many animals – in particular African elephants, rhinos, tigers, and pangolins – are under extreme pressure because of an unprecedented spike in the illegal wildlife trade. The world is in a global poaching crisis, and everyone has to do their part to stop this, before it is too late. Emirates believes that the global transport industry, including airlines, can play a significant role to break the supply chain of illegal wildlife trade. And at Emirates, we are committing the resources to do our part.”

Quick facts about the threat to wildlife from poaching and illegal trade:

Help end the illegal wildlife trade which is killing our planet’s endangered species.
We too, can contribute in a big way, by boycotting products made from the parts of these endangered animals and discouraging others from doing so. UNITED TO SAVE WILDLIFE.